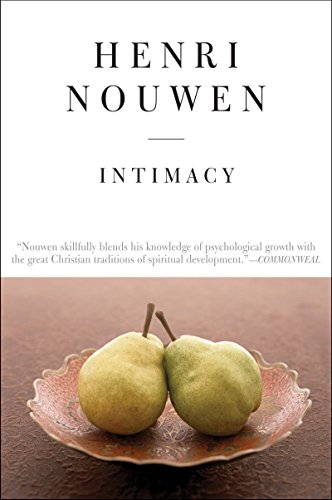 Category: book reviews
Author: Henri J. M. Nouwen
Publisher: HarperOne
Format: Paperback
“On the long road it’s good to have Nouwen and his divining rod. Deftly he bends toward the drop of spiritual wisdom caked in the most ordinary things.”—Helen Prejean, C.S.J., author of Dead Man Walking In his classic work Intimacy, Henry J.M. Nouwen, one of the most beloved spiritual writers of the 20th century, explores the pathway to a more creative and fulfilling intimacy in our relationship with God. A wise and optimistic guide to the…

Let me step back a moment.

Two weeks ago I received a call from a 61-year old man whose 27-year old son died in April. Given Covid restrictions I did a small funeral and a few follow up conversations with the gentleman to help him both with the loss of his son as well as some other faith and life challenges. He called to ask if I would fly out to the Oregon Coast and spend some time with him and his girlfriend as he continued to process faith in the midst of loss.

Wanting to be intentional, I pulled an array of resources off my bookshelves and began to thumb through them, creating six spiritual formation sessions for the three of us to use to ground us in grace.

Then, as I packed on Monday night, I decided to take a few of the books I pulled but did not flip through with me. Among them, Intimacy.

I read the first chapter, From Magic to Faith, at the airport and found it interesting. On the plane, I read the second chapter, The Challenge to Love. Then I read it again, and again, and again. The words of that chapter consumed most of my flight from Denver to Portland.

Much like my post Give Unto Caesar, it breaks the world down into two ways of being. One of power or taking, and the other of love or (for)giving. Nouwen goes on to describe the way of love as embodying truthfulness, tenderness, and disarmament. It is, quite simply, the way of Jesus.

I spent most of my time in Oregon talking about power and love as it relates to both life and death. I believe these are the conversations all of us need to have.

The rest of the book is alright, but chapter two alone is worth the price and should be read over and over again until we begin to categorize life based on power and love.