Amusing Ourselves to Death 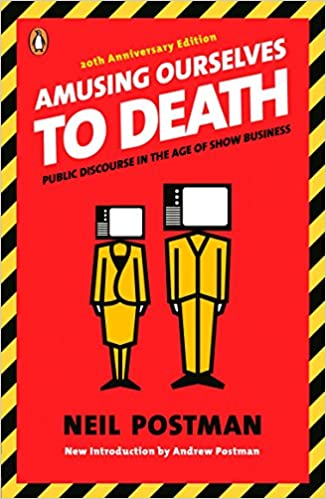 Category: book reviews
Author: Neil Postman
Publisher: Penguin Books
Format: Paperback
Television has conditioned us to tolerate visually entertaining material measured out in spoonfuls of time, to the detriment of rational public discourse and reasoned public affairs. In this eloquent, persuasive book, Neil Postman alerts us to the real and present dangers of this state of affairs, and offers compelling suggestions as to how to withstand the media onslaught. Before we hand over politics, education, religion, and journalism to the show business demands of the television…

Amusing Ourselves to Death, originally written in 1985 and then re-released 20 years later, is an opportunity to take a long and hard look in the mirror. Just be prepared to not like what you see.

Last week I had a few conversations with a Trump supporter. The week before I had a conversation with a Biden supporter. Both clearly demonstrated themselves as examples of what Postman tries to communicate in the must read, Amusing Ourselves to Death.

He opened, “I just don’t know what else Trump could have done about the Coronavirus.”

“Well,” I responded, ”he could have picked up the pandemic playbook that Obama left behind when he first heard about the threat in December.”

“Or you can look how well it’s now contained in Europe as opposed to the US.”

His response, “Yeah, I don’t know about all that. I just don’t know what else Trump could have done about it. Nobody could have expected it.”

There is no doubt in my mind that a relatively small group of people hold a significant Orwellian power over those on the political right. However, the end result feels much more like something from Huxley’s, Brave New World. That is the core of Postman’s argument.

My conversation with a Biden supporter happened on the Facebook page of a mutual friend. Honestly, there are few platforms better suited to Postman’s assessment of the world we live in.

I remember seeing her commentary a few months earlier when it looked like Bernie might secure the Democratic nomination. In response to our mutual friend’s, “Vote Blue No Matter Who” slogan, she talked about not voting for President and focusing on down ballot elections.

However, as Biden secured the nomination, I voiced my grievances with him as a candidate. As a start, I reject any politician who embraces neoliberal economics. However, Biden is also the primary author of the crime bill, allowed the torment of Anita Hill during the Clarence Thomas hearing, and, as far as I can tell, is in the midst of serious cognitive decline.

She ignored the economics and Anita Hill arguments and dismissed the crime bill as something that happened years ago so it no longer matters. Never mind that it is still the law of the land and impacts any attempt at criminal justice reform. Then she declared that not voting for Biden would be voting for Trump.

When I brought up her past comments and refusal to vote for Bernie, she blocked me.

Again, it is hard to not see how right Postman was. We are no longer people who are able to think.