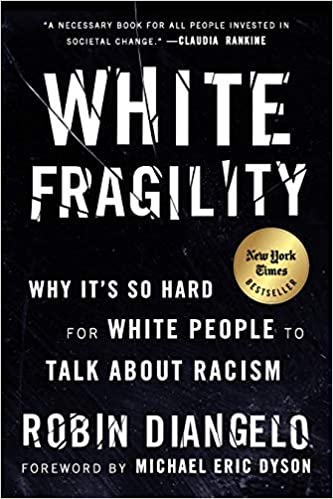 Category: book reviews
Tag: racism
Author: Robin DiAngelo
Publisher: Beacon Press
Format: Paperback
The New York Times best-selling book exploring the counterproductive reactions white people have when their assumptions about race are challenged, and how these reactions maintain racial inequality.Referring to the defensive moves that white people make when challenged racially, white fragility is characterized by emotions such as anger, fear, and guilt and by behaviors including argumentation and silence. These behaviors, in turn, function to reinstate white racial equilibrium and prevent any meaningful cross-racial dialogue. In this…

White Fragility is one of the most difficult books I have read. This difficulty has nothing to do with the speech patterns of the author or the complexity of the material offered. Rather, it is difficult because it convicts.

I am a White male who grew up in very White and relatively affluent suburb of Denver, Colorado. However, starting with an East St. Louis fieldwork placement in Seminary, I have spent much of the past seventeen years in urban and typically Black settings. This includes ministry in East St. Louis, urban St. Louis, South Africa, and urban Denver. I took time to listen as congregants and students told their stories and shared their hearts.

I spent 7 years married to a Black woman I still adore. One of my best friends is a Black man. I regularly speak out on issues surround systemic racism. I criticize the presumptive Democratic Presidential Nominee Joe Biden because of his association with the crime bill, the Anita Hill trial, and currently policy positions that do little more than pander to Black voters.

Theologically, I see God as one with preferential treatment for the poor and marginalized. I have come to understand the Gospel as an invitation to a kingdom where there is no division based on race, gender, or class.

Because of all this, it is not unusual for people of color to describe me as woke and appreciate my awareness of their struggle. Yet, despite all of this, White Fragility makes it clear that I am still part of the problem.

The struggle for approval is a lifelong battle for me. Like all people, I want to feel important, significant, and good. I have used both my position in the pulpit as well as my statements on social media to try and garner the kinds of support that makes me feel good.

While, over the past four years, my understanding of the Gospel undermines this compulsion for approval, I have to admit that it is still there. As a result, there are times I find myself wanting to repeatedly check Facebook for new likes or comments after I post something. The reaction, good or bad, does not matter nearly as much as their is a reaction.

If it is good, I get to see that it comes from a source I admire and think, “I am good!” If it is an attack, I get to celebrate how much better I am than the other person.

This is not something that happens with every post, and the desire to follow up becomes less and less as time goes on, but it’s still there. Most often, I feel it with three kinds of posts:

I could add father-son posts to that list but I rarely share them anymore, largely because I have decided to spend time with my son rather than letting everyone else know I am spending time with or I spent time with my son.

While this is not the behavior of someone as emotionally and spiritually mature as I would like to be, it is particularly problematic when it comes to postings on race. In these situations, White Fragility points out that I am using the plight of minorities for my personal affirmation and edification.

In the midst of the Greg Floyd protests, I am realizing I need to change my posting habits in this realm. So here is my plan:

This will happen in addition to purposeful reading and research I do on racial issues. Something I took from my first reading of White Fragility.

What is Your White Fragility?

This is just one example of many throughout this book. As I opened, it is hard to read. But all White people, especially those of us who think of ourselves as culturally aware, need to continue our part of the journey that ends with the liberation of our brothers and sisters of color.

Where It Falls Short in Practice

This is an addendum added a month later, but I think it provides an excellent take on where the content of this book falls short. It’s easy to do things to be more “woke.” It’s hard to do the things that actually bring about equality. This is especially true in the corporate world that largely controls our politics and hires people like Diangelo so they can look like their doing something about the problems they’ve created.