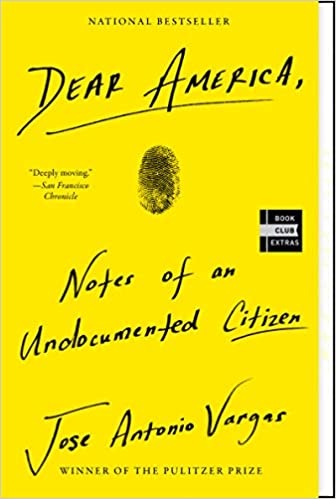 Dear America tells the kind of story Americans love to celebrate. This is because, on the surface, it appears to be a vibrant example that the American Dream is alive and well. It tells the story of a poor minority kid, growing up in the part of Silicon Valley we never hear about. He goes on to become a Pulitzer Prize winning journalist. There is just one small catch.

The author, Jose Antonio Vargas is from the Philippines. He lived there until he was twelve and came to America to live with family. His mother sent him here without legal documentation, something He became aware of as a sixteen year old trying to get a driver’s license. Everything he did from that day on demanded hiding his immigration status.

This book tells the story, not only of the hoops he had to jump through, but the constant fear of being caught and the struggle to be honest with himself even as he lied to everyone else.

This simple opening would not be popular if conservatives rooted their immigration talking points in facts over narrative. After all, if the bemoaned “chain migration” were true, both Vargas and his mother would be in America legally.

This is just one of many factual holes in popular narratives surrounding legal immigration. To expand on this, I turn to John Oliver. However, if you are not a fan of his crass and sensationalized way of delivering carefully researched facts, here’s a piece from Time discussing the episode:

How to Read, Dear America

This book is best read as a soul shaping story. The kind you allow to tug at your heart strings. It should make you wonder about the differences between the truth and your perceptions. Then, throughly moved, it should prompt action.

First, a desire to discover truth versus fiction. To cast aside narratives you might embrace, but not without coming to understand their origins.

Then, incorporate it into the metrics you use to select political candidates. After all, a line to get into the country only comes when the law creates a line.