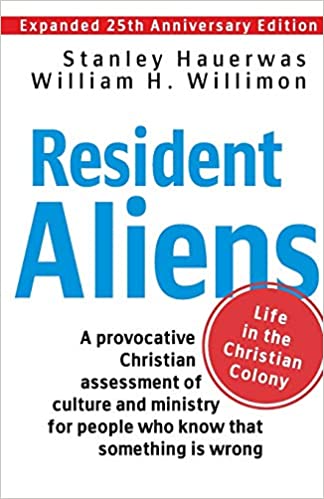 Category: book reviews
Authors: Stanley Hauerwas, William H. Willimon
Publisher: Abington Press
Format: Paperback
Only when the Church enacts its scandalous Jesus-centered tradition will it truly be the body of Christ and transform the world. Twenty-five years after its first appearance, Resident Aliens remains a prophetic vision of how the Church can regain its vitality, battle its malaise, reclaim its capacity to nourish souls, and stand firmly against the illusions, pretensions, and eroding values of today's world.Resident Aliens discusses the nature of the church and its relationship to surrounding…

The morning after Super Tuesday 2020 I picked up Resident Aliens. Deeply discouraged and hurting for our country, I needed something to help me focus my pain on some thing productive. I remember scanning through Hauerwas and Willimon’s work while earning my Masters of Divinity at Concordia Seminary in St. Louis, and something told me it would speak to me in that moment.

Where I Stand Politically

I jokingly say that I out-Ghandi Ghandi. Far and away, the US politician whose policy I most align myself with is Bernie Sanders. So the sudden sweep of Joe Biden through the Democratic Primary felt like a punch in the gut. But let me clarify what it means when I say that I align myself with Bernie.

I mean I believe we should build our economy around what is good for everyday people as opposed to big business. I reject neoliberalism because I believe, over the past forty years, it clearly demonstrates that it is not good for everyday people. Biden is a died in the wool neoliberal (so are Pete, Amy, Kamala and most of the other DNC candidates).

I believe foreign aid is more important than foreign intervention. From Iran to Pakistan to Venezuela to Cuba, much of the chaos in the world comes from the West either politically or through business channels trying to control foreign resources. Often this comes under the guise of spreading Democracy while it is really about allowing Western business to extract goods (oil, minerals, crops, etc.) that would otherwise be socialized. Bombs are expensive and radicalize victims of collateral damage. Our dollars are much better spent at home or making sure people around the world have their basic needs met.

Socially, I believe the Kingdom of God eradicates divides based on ethnicity, gender, and class. Therefore I stand Black Lives Matter and I believe women. The abortion debate is one we can have once we create a society that places enough value on those already born that the idea of a child is not a financial burden.

Ultimately, I believe in the way of love over power, the way of Jesus over Caesar, the Kingdom of Light over Darkness.

So there I sat deflated. Joe “Crime Bill” Biden, really? They went for the guy who allowed Anita Hill’s torment? The same guy who, in the coming weeks would say, “Shoot them in the leg instead of the heart.” You know, the one who told corporate America that nothing would fundamentally change under his administration? Joe Biden who helped create the political landscape that made Donald Trump seem like a viable option to millions of Americans. A guy whose entire campaign is about hiding from the spotlight and allowing errant nostalgia to win the day? That is who people voted for?

So, disgruntled and hopeless, I began to read. At one point, I set the book down for a while because I needed to reset my theology of the Church. So I read, Theology For the Community of God. I wrote about my findings in the May issue of Abundance Reconstructed. But eventually, I picked the book up again.

As I sit here this morning, I see a clear distinction between our politics and our politic. Politics is the bipartisan shit-show constantly bent on demonizing the other side in attempt to gain more power. Our politic on the other hand is the collection of values and ideas that help us decide how to live together.

Resident Aliens help me realize I placed too much hope in the democratic institutions of our republic … our politics. Instead, as someone with a pastoral calling, I need to focus on helping the Church be the Church. By nurturing resident aliens living in the Christian colony, we can, among other things, reveal a different politic. This does not mean we skip voting. We just vote based on politic over politics. It also means we stay hopeful when we believe politics fails.