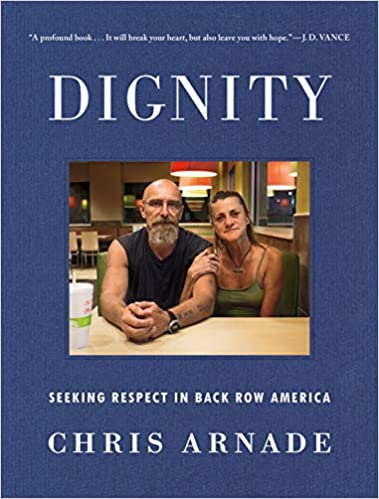 I initially learned about Chris Arnade’s book, Dignity through an interview on The Hill’s YouTube show, Rising. Before the interview ended, I bought the book on Audible and it quickly took the top spot in my playlist.

In other reviews I made clear my frustration with both Republican and Democratic politics. Much of this comes down to my rejection of the neoliberalism that defines the economic policy of both sides. For more on this, I strongly recommend another Rising prompted read, Matt Stoller’s Goliath. Dignity explores these more philosophical arguments in a very human way.

Author Chris Arnade spent years traveling around the United States visiting the communities people of means avoid. Armed with his camera, notepad, cell phone and some cash in small bills, he met the people most of us will never meet. He talked to them. Listened to their stories. Heard their frustration about the disappearance of jobs and opportunity, but also the challenges that come with the suggestion that they, ”just move.”

In the end, his book reminds us that we are all created in the image of God. As a result, we all have an inherent dignity. The problem is, the society we live in often fails to not only recognize it, but seeks to strip it from those it deems less valuable. Much like I discuss in my journey to true productivity, society only values us as human doings rather than human beings.

Some of those on the privilege side foolishly pretend we live in a meritocracy. Others use victimhood as a means to gain power. In the process, the true victims are ignored. But not by Chris Arnade. Black and white, liberal and conservative, working and unemployed, clean and addicted, he tells their stories. In doing so, he invites us to recognize their inherent dignity.