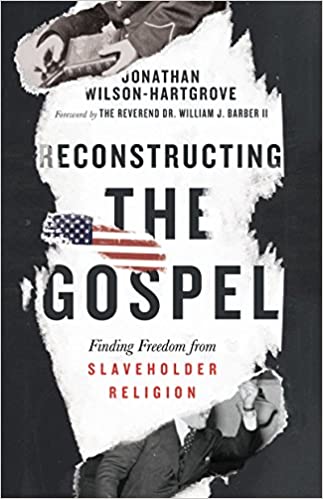 Category: book reviews
Tag: racism
Author: Jonathan Wilson-Hartgrove
Publisher: InterVarsity Press
Format: Hardcover
"I am a man torn in two. And the gospel I inherited is divided."Jonathan Wilson-Hartgrove grew up in the Bible Belt in the American South as a faithful church-going Christian. But he gradually came to realize that the gospel his Christianity proclaimed was not good news for everybody. The same Christianity that sang, "Amazing grace, how sweet the sound" also perpetuated racial injustice and white supremacy in the name of Jesus. His Christianity, he discovered,…

It argues popular American Evangelicalism as a well-funded and racially charged political movement masquerading a faith. As much as adherents claim its modern day form is a response to Roe vs. Wade, Reconstructing the Gospel offers a correct analysis as history reveals roots in racial segregation (or, if you prefer a podcast, this is an excellent option).

American Evangelicalism certainly includes Jesus and the Bible, but largely ignores Jesus‘ teaching. Instead there is a focus on the crucifixion (and to some extent the resurrection), along with Paul read through the lens of conservative values.

My Reconstructing the Gospel

While, based on the analysis of Bebbington, I am loosely Evangelical, I do not label myself such. Moreover, my quest to reconstruct the Gospel began, not with social issues, but from a more personal place. That said, the consequences of our reconstruction brought us to a very similar place.

This includes Jesus preferential treatment for the marginalized and the good news needing to be good news for everyone regardless of race, gender, or class.

My biggest challenge with the book is the title and the notion on an effective post-Civil War reconstruction. Rather, following a short season of movement towards equality, Jim Crow laws became the norm. Social and economic marginalization of former slaves took a new form. White men reconstructed society to create a new slavery that simply lacked chains. White American Evangelicalism is part of this continued reconstruction.

That said, Reconstructing the Gospel offers a fantastic alternative to the offerings of White Evangelicalism.